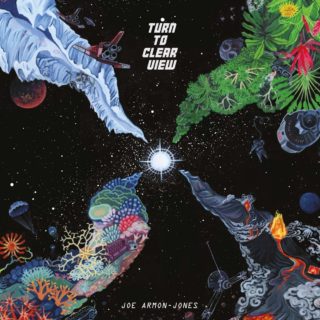 Of all the genres to have a comeback for lads in little above-the-ear beanies, I would not have guessed it’d be jazz. Here we are, though, in a post-Ezra Collective world, and now your boyfriend has played the first 15 minutes of Kind of Blue 20 different times around you. The comeback isn’t without reason, though: the London scene right now is rammed with incredibly talented musicians melting genres together into a cosmic soup.

Nowhere is that more apparent than on Turn to Clear View, which is similarly packed with the genre fusions that broke keys player Joe Armon-Jones and his band Ezra Collective out to a wider indie audience in the first place. Armon-Jones flirts with IDM on ‘Icy Roads (Stacked)’, which floats on a bed of retro-ambient synths and echoing flutters before it breaks down into a distorted vocal outro which calls to mind Boards of Canada or Dream Catalogue more than it does Herbie Hancock.

Equally, ‘The Leo and Aquarius’ showcases just why this scene is an essential part of UK culture in 2019, even for non-fans. It opens with a super-simple piano riff which could have come straight from a RZA or DJ Muggs beat before almost immediately washing out into a muted ballad. The song steps back into hip-hop for a verse from Jehst over ricocheting spaghetti-western guitar, then rips into the LA beat scene for the outro. If this sounds like a mad amount of content to pack into six minutes, then guess what: you’re right. It’s a testament to Armon-Jones’s skill that he twines all these different genres together without it ever feeling uncomfortable.

That said, artistically this is just more of the same from Armon-Jones. If you go in expecting the album to make any statement greater than “here’s a few more tracks” then you’ll be disappointed. Perhaps that’s to be expected given that this album was recorded with a nearly identical lineup to 2018’s Starting Today, but it’s saddening that such an obviously talented artist and bandleader isn’t aiming to achieve something bigger.