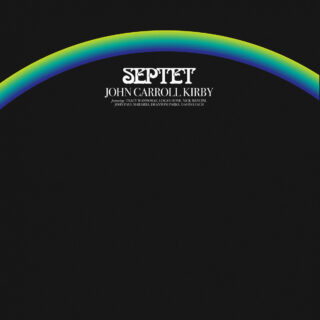 “Muzak” hasn’t always been a derogatory term. Indeed, when it first emerged in 1950s America, the background music then created in bulk by the Muzak Holdings Company represented all that was hopeful and utopian about post-war life in the USA, with jaunty brass, decadent strings and tinkling marimba magically everpresent, rounding off the edges of a life of guiltless consumerism, be that at the mall or riding the elevator up to your luxurious penthouse apartment. 70 years on, however, the general public’s relationship with piped music has somewhat evolved: while the idea of being inescapably followed around by a velvety jazz orchestra seems fairly hellish, the lounge music of those halcyon days is also increasingly fetishised both by cultural nostalgists longing for simpler times and by audiophiles still in awe of those recordings’ depthless sheen.

John Carroll Kirby, an in-the-background session player for the musical jetset (credits with Frank Ocean and Solange, Harry Styles and Mark Ronson) is clearly one such muzak fetishist, and Septet, a sixth album in four years, is his most ardent ode to the form yet: here is 45 minutes of faultlessly neutral and impeccably played instrumental ditties delivered with such smoothness that it’s barely even possible to detect the gaps between the tracks. As source material, this isn’t a bad thing: the likes of the Avalanches would cut up ‘P64 by My Side’ and inject uncanny melancholy into the cracks, Air would add a sense of lovelorn langour to ‘Swallow Tail’’s polite synth runs, and Stereolab would turn the first two chords of ‘The Quest of Chico Hamilton’ into a seven-minute heads-down workout.

In this form, though, Septet is just too innocuous to be anything more than extraordinarily high-end lift music or hi-fi demonstration fodder, faultless and danger free, the kind of music so dynamic-less that you forget is playing after a while, that startles you only when it stops, as if the natural order of things should have it on loop forever more. There’s a sneaky suspicion that all this is deliberate — after all, a musician of Kirby’s calibre can’t have made something this characterless, this wilfully unobservable, by accident. If it is one great post-modern prank/observation, though, the joke’s on Kirby: so perfectly middle-of-the-road is Septet is that, on top of anything else, it’s also unprovocative to a tee.