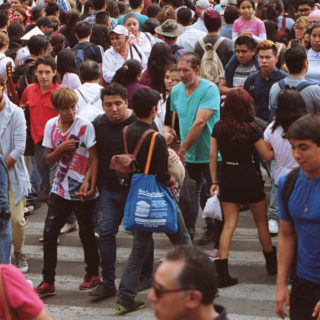 Here’s the story: Juan Wauters left his hometown of Montevideo, Uruguay, as a teenager in 2002 to relocate to New York City. There, he began making music, releasing a bunch of records with his band The Beets and a couple of solo albums, most of them on the Captured Tracks label. While The Beets played a raw kind of garage rock, Wauters as a solo artist has always been going back to his Latino roots with his songwriting, though never abandoning the English language.

For his third solo effort, though, he decided to embark on a trip through South America, to deepen his link with his cultural origins. Starting in Mexico City, he travelled to Puerto Rico, Peru, Chile, Argentina and, of course, Uruguay, with a mobile recording studio in his luggage, writing and cutting in every country in collaboration with local musicians. The material he amassed would eventually become ‘La Onda de Juan Pablo’.

A trip akin to a religious experience of conversion on the road, a multicultural encounter of people with different stories and backgrounds, as well as to a trip inside Wauters’ own world, the ten track here serve as a collection of short stories. Told in Spanish, each one is about everyday life, mundane experiences and ordinary people, with a surreal and comic tone.

It could look like ‘La Onda of Pablo’ is some sort of musical gentrification, borrowing from traditional Southern American music to add an estranging register to a Captured Track release, if it wasn’t for Wauter’s own heritage, of course, but more importantly the respect in which he so clear conducted this celebratory new project.