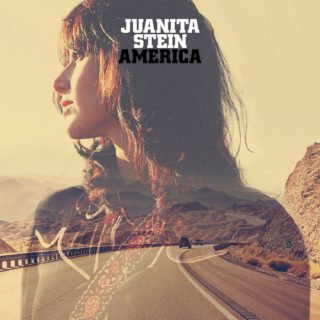 Juanita Stein is the frontwoman and driving force of Howling Bells, long-time purveyors of raw, scuzzy, indie rock. Now four albums into their career, the band’s star was brightest back in 2006 when their eponymous debut album broke the four-piece as fuzzily melodic newcomers with a knack for a hooky chorus. Stein’s smokily distinctive voice is the glorious centerpiece of their music; and live, her dark charisma is their magnetic draw.

So ‘America’, Stein’s debut solo effort, carries much promise. Joining the canon of literally countless records, books, films and paintings which pay tribute in some way to the “dark heart of America”, it’s a collection of considered yet evocative songs which touch on some aspect of U.S. life, or are stylistically influenced by the country’s most revered musicians (Stein herself cites Dusty Springfield and Roy Orbison, amongst others).

Thus ‘Florence’ sees a sultry voice and a southern swing slide over a shuffling, eyes-narrowed, cowboy gunfight kinda backdrop; it’s a superb opening to the album, steel guitar and all. Then there’s the darkly chaotic ‘Black Winds’ and the magnificent grandstanding, bold crescendos of ‘It’s All Wrong’. ‘Not Paradise’, late in the piece, is a perfectly sad ballad with beautiful, tremulous vocals.

Stein’s voice is the consistently beguiling thread which holds ‘America’ together. But with its references to bourbon, gambling men and copious heartbreak, and its heavy stylistic borrowings, there are two ways of viewing this record; either as a slickly accomplished pastiche (but a pastiche all the same); or, as its creator intends, as a beautifully observed and evocative ode to America. It deserves to be heard as the latter; for me this album paints a gallery of vivid pictures, and Stein is the powerfully creative master of her art.