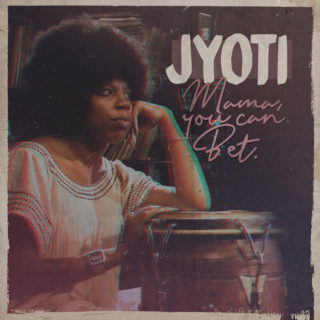 “Fools don’t think I play jazz,” said Cecil Taylor in 1965, hitting the piano as if it were a kick drum in a grimy Manhattan attic, “[but] music is an attitude, a group of symbols of a way of life.” Val Wilmer’s brilliant As Serious As Your Life: Black Music and the Free Jazz Revolution, shows Taylor as the avant-garde genius disguised as tradesman, John Coltrane as spiritual leader searching for higher plains and Sun Ra painting self-coined pictures of infinity. The slow shift towards equal participation for women in jazz was starting beyond their supportive roles as mothers and grandmothers, but Black genius wasn’t being recognised, let alone Black female genius.

Move forward some sixty years from the beginnings of free jazz and it wouldn’t be unreasonable to label multi-instrumentalist and producer Georgia Anne Muldrow as the scene’s future disruptor. Mama, You Can Bet!, her third album under the moniker Jyoti (a name she reserves for her jazz projects, bestowed upon her by the late, great Alice Coltrane), is jarring, groove-heavy, dissonant and entirely of her own design. Her only collaborator across fifteen tracks is Lakecia Benjamin, who takes sax duties on ‘Ra’s Noise (Thukumbado)’, a free jazz attack befitting of the Arkestra and their cosmic investigations.

From hard bop to lounge, Muldrow’s virtuosity harks back to free jazz lineage with as much explorative force as it moves forward. The wounded and abrasive sax in ‘Bop for Aneho’ is a jagged, uneasy continuation of the deeply wistful title track, just as ‘Swing, Kirikou! Swing’ is a rasping end to the extrapolated piano balladry of ‘Skippin and Trippin’. Her re(Gee)mixes of the Charles Mingus compositions ‘Bemoanable Lady’ and ‘Fabus Foo’ – first commissioned in 2017 – become astral-funk wonders, updating Mingus’s Black American activism to appease a new ecosystem. This isn’t a space to get too comfortable in; usually a calming force, the debut of Muldrow’s own voice within her Jyoti project is startling in its spiritual clangour. ‘Orgone’ is a screaming cry for African diasporic hope, whilst album standout ‘This Walk’ recalls Alice Coltrane more urgently than ever – a deep awakening and call to action over piano and harp, incredibly played, as serious as her life.