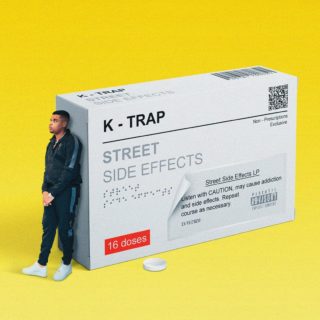 Having unmasked last year, retiring his trademark black balaclava, 25-year-old South London rapper K-Trap is showing us what he really looks like. Now seeking to become the latest to transition from the UK drill scene to mainstream success, K-Trap’s debut album, Street Side Effects, endeavours to demonstrate what he really sounds like – with mixed results.

Across the LP, K-Trap has a slickly-delivered cadence that stands out. It’s a pulp-free mix of Dave’s America-friendly clarity, P-Money’s earnest energy and AJ Tracey’s effortless cool, an intoxicating blend that K-Trap himself sums up well when he labels himself a “a trapper with a silent T”.

Like Headie One, K-Trap’s bars invigorate with their matter-of-factness, the album regularly cutting deep with raw reflections recounting K-Trap’s perilous road to prominence, through the highs of block success (“Got a brick on Monday / Thursday, it’s gone / What an excellent week”) to the lows of isolation, devastation and loss (“I feel like giving up / Everybody phoning me / And I don’t feel like picking up”).

However, in a scene so strong, you feel K-Trap’s unique voice is drowned out by his idols’ sounds, trying too hard to bend to their styles instead of cementing his own, with a long list of producers not helping matters. As a result, except for intense opener ‘Street Side Effects’, the bop-laden duel of ‘Probably’, and the explosive “Whip That Work”, the standout moments are the features.

The calm cool of ‘Shower Posse’, featuring the dominating presence of Giggs, best symbolises what K-Trap is missing, as the road rap veteran’s grunts and vocal ticks instantly make the track his own. Likewise, the solemn, acoustic rumination of ‘Lessons’ with Wretch 32 is stirring, but you come out remembering Wretch’s Tottenham estates and not K-Trap’s Lambeth.

While K-Trap’s narrative and delivery is a clear gift, there is a lack of sonic identity across the otherwise enjoyable 16-track album, making it unclear who he truly wants to be as an artist. It’s a delicate balancing act that doesn’t quite pay off; yet K-Trap himself does acknowledge this, rapping, “One hit away to be a number one star, or one brick away from being a number on the card.” You feel next time he’ll get the mix right.