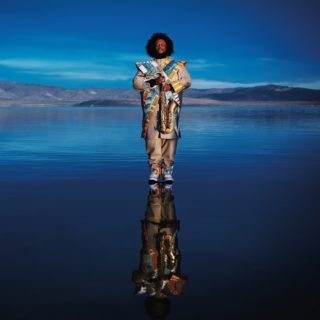 The proverbial advice on how to eat an elephant  (“one mouthful at a time”) could easily be adapted for Kamasi Washington’s cosmic jazz behemoths. His latest, comprising two suites (‘Earth’, first, then ‘Heaven’) of well over 70 minutes each, might not be as protracted as his three-hour debut, but it remains a foreboding prospect to try and finish in a single sitting nonetheless. Accordingly, there are two distinct ways of attempting to get through ‘Heaven And Earth’. The first – song by song, and therefore in roughly ten-minute chunks – is intensely rewarding, allowing the listener to focus on Washington’s complex arrangements, solos that veer from fluttering to feral, and gorgeous interplay of spiritual, almost devotional music with irresistible groove: this way, the tender melody of ‘Testify’, the rhythmic tics of ‘One Of One’ and ‘Streetfighter Mas’’ RnB strut can all be savoured.

The other, perhaps more conventional method, taking in the full canvas in one go, unfortunately requires stepping back so much that virtually all detail is lost. It’s not that Washington’s compositional style or choice of timbre combinations is formulaic, necessarily, but after nearly two and a half hours of the same choral swells and pieces of similar length, structure and pace, something rather unattractively macho replaces Washington’s nuanced, delicate writing: the emphasis shifts towards size, power and endurance rather than expression and sensitivity, and as final track ‘Will You Sing’ begins, the response is one of relief rather than the enjoyment that a track this yearning, climactic and inventive should elicit.

An edit of ‘Heaven And Earth’ that preserved, say, just the vocal tracks, would result in a masterpiece of coherence and retain Washington’s clear desire for heft. As it is, everything here might be fine delicacy, but together it’s too rich for all but the biggest appetites.