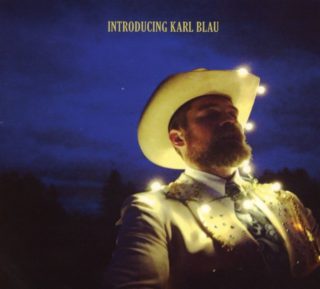 This is a covers album, taking the raw, ragged country music of the 60s and 70s and coating it with a glossy contemporary sheen. It’s a silken smooth record, produced by Tucker Martine, rich in sweeping strings and a velvetiness so lush that on occasion it threatens to suffocate the record; so pristine, life-flattening and sickly sweet. For the most part, though, ‘Introducing…’ is complimentary with Karl Blau’s voice, a subtle, gentle and likeable croon; a voice that glides perfectly along with some chosen tracks such as ‘That’s How I Got to Memphis’. But overall the album lacks huge variation – its pace and tone is a little one-note despite the breadth of the covers stretching from the Bee Gees to Link Wray.

It feels like an ode to classic songwriting in every possible sense, the record unfurling like one elongated Harry Nilsson track. It’s difficult not to like Blau’s voice and his take on these songs (or what the singer is all about, as a DIY icon who has self-released 40 odd records) but there is an overwhelming feeling of wishing he had just done a little more with them.