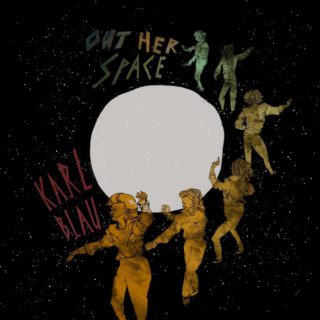 Karl Blau’s 10th record is only his second to be released outside the US, and the first to contain original material after last year’s rather charmingly understated ‘Introducing Karl Blau’. Where that set of covers accentuated Blau’s poignant, chocolaty voice and his inviting way of negotiating a melancholy melody, though, ‘Out Her Space’ is far scrappier.

Songs creep into existence and then change tack midway without warning, and Blau’s performance style frequently resembles someone awoken abruptly by having a microphone thrust into his face: slightly dazed and dozy, he makes a game attempt to join in, but his somnolent inability to engage is a drag – indeed, it’s not until the Arthur Lee-esque ‘Blue As My Name’, five tracks in, that Blau connects with any meaning.

That’s a shame: when he does, as on the gentle boogie of ‘Where You Goin’ Papa’, Blau is an amiably jaunty singer with a knack for bluesy bonhomie. Most of ‘Out Her Space’, however, seems surprised by its own presence – the impression is that Blau should stick to other people’s songs.