Given her notable remixes for Björk and Zola Jesus, in addition to handling production work for serpentwithfeet, it’s tempting to view Katie Gately as one of many secretly influential architects in popular modern left-field music. Like all artists of note, approaches change to suit an occasion. On her second LP Loom – her first on Houndstooth – sadly, it begins with an ending.

Gately reputedly scrapped a near-complete album at the time of her mother’s cancer diagnosis, whereupon she relocated from LA to her family home in Brooklyn, and one might always wonder what could have been of Loom 0.5. But there’s an overwhelming feeling all across the presented work that were these songs written in any other state than fitful late night bursts of feverish creativity, they would’ve sat incomplete and reconfigured to absurdity until the end of time. “I didn’t have time to worry about perfecting things,” says Gately. “I was just working when everyone was asleep – it was the only time I had.” Whatever was to come before the inception of Loom, it’s hard to imagine anything that could be this difficult, lengthy or fractured.

Gately’s mother passed in 2018, and Loom is reflective of the discombobulated process of grieving, a process by which people act uncharacteristically in forfeit to the mind-scramble of mourning. It’s the sound of life moving forward, and all the pain it entails. It’s a scattered archive of loss in a shattered life, full of memories misplaced or mislabeled, threaded together in an attempt at patchwork remembrance.

This allows the album the heightened dramatic flare of opera throughout (with Gately as its moonstruck wine-drunkard) making it hotly reminiscent of last year’s CALIGULA by LINGUA IGNOTA and the late work of Scott Walker (sans his lyrical cock and ball torture); Loom is an album that demands to be heard, if only once in its entirety, so all-encompassing its theatricality seems. On the mammoth centrepiece ‘Bracer’, we appear to hear the LP’s few discernible lyrics, brought into stark relief by gradually amplified repetition: “take my sin and shove it into yours”. Easily missed at first in the smokescreen of digitised noises, one of the sole transferences from Gately’s 2016 debut Color are her melodic sensibilities, occasionally bordering on upbeat pop on ‘Tower’ and swaying like seasickness on the maniacal ‘Waltz’.

The sonic kitchen sink approach, which entails a recording process that incorporates recordings of earthquakes, howling wolves, screaming peacocks (not that any of these are discernible as such in the slightest) lends the album a flavour of the baroque. In other words, Loom is an obsessive fool’s errand; exhausting, if not also dizzyingly exhaustive. 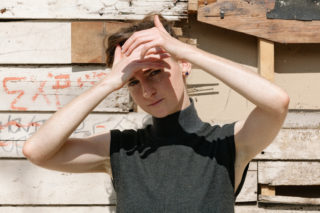