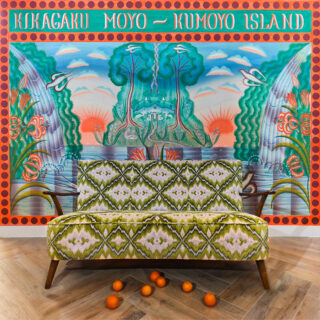 Ten years is a perfectly respectable length of time for a band to exist, providing more than enough opportunity to establish a sound, progress it, win a bit of success and not completely fall out with one another. As countless examples from music history will attest, too, it’s entering the second decade that often prompts bloat, stagnation and mutual loathing, and it seems that Kikagaku Moyo are seeking to avoid this particular trap: after ten years together, the Japanese psych quintet are now disbanding, with Kumoyo Island their fifth album and swansong.

And broadly, what a way to go out: Kumoyo Island is insistent, escapist, dreamlike and ultimately a whole load of fun, full of blazing, overdriven, heads-down grooves (the first half of ‘Cardboard Pile’), slyly experimental cop-show funk (‘Dancing Blue’ and ‘Monaka’), and undulating forays into kosmische-tinged exotica (their cover of bossa nova hero Erasmos Carlos’ ‘Meu Mar’). There are also ramshackle jams reminiscent of the Beta Band’s playfulness (‘Gomugomu’) and a gorgeously meditative final track, full of nervously explorative textures and timbres that stretches out beautifully, bookending the band’s recording career with a welcome sense of calm after the breakneck pace of the previous 45 minutes.

Crucially, though, this isn’t just a genre raid by hotshot musicians playing dress-up. Instead, Kumoyo Island gains its considerable coherence through a consistent group personality of subversive mischief and exploration combined with heartfelt ardour that threads its way through all the tracks here, making the record a rather wonderfully addictive whole. That personality makes Kikagaku Moyo’s imminent demise all the more bittersweet – theirs is the sort that only enriches their music and their performance style, and it’ll be missed. Then again, ten years of madcap experimentation and wig-outs is an excellent legacy to leave, and Kumoyo Island works as an exemplary career full stop.