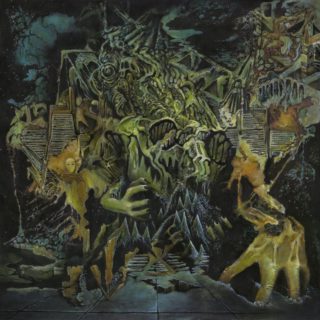 Black Dynamite perfected the bad film spoof. It earned its classic status through the gimmicks that would have made its source material unwatchable. After forcing yet another friend though it recently after giving the new Gizzard a spin, it clicked. King Gizzard and the Lizard Wizard are the Black Dynamite of rock. Their meticulously observant homages of psych-rock clichés are so skilled in emulating their influences that they proudly stand alongside them, having a giggle over how daft it all was.

With album 10, ‘Murder of the Universe’, they are on schedule to complete this year’s five album promise. If that sounds a bit gimmicky, it’s because, um, it is. Gizzard thrive on gimmicks. They’ve built their whole carrier on tinkering with new ones, layering their albums with Easter eggs, fiendish puzzles and cartoon absurdity.

This time, the band are going back to the narrative concept, tackling a three-act saga of gruesome Tolkien-worthy beasts and a Japanese cyborg who wants to feel whole. Act I is a sweaty eighteen-minute jam, and one of the best things the band have conjured. Broken up into call-and-response sections, the group find ways to bring back riffs sounding just as urgent, revitalised by an improvised embellishment, or a new flashy instrumental, or a devious production trick; ‘Altered Beast III’ throws in deadpan harmonies and snappy panning drums. Act III pulls from Castlevania midi-synths and Y2K panic in an apocalyptic tale that ends in the death of its narrator whose hammy monologues make Stu Mackenzie’s singing elegant.

They’re constantly referencing their older albums, too. The riff from ‘People Vultures’ brings us into Act II, while Mackenzie’s ‘HOOOOOOOWOO!’ yelps connect many of the bands thrashiest moments. ‘Murder of the Universe’ stands out because it perfects what makes the band special, rather than moving anything forward. Those tired of the joke might not be interested, but for the kind of person that religiously rewatches Black Dynamite, it’s glorious.