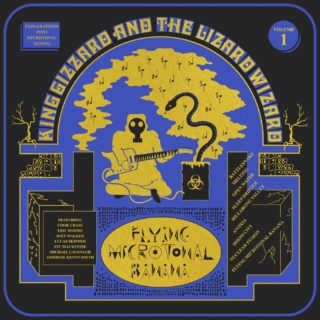 Given that King Gizzard and The Lizard Wizard apparently plan to release no fewer than five new records in 2017, it might not matter all that much whether the first of them, ‘Flying Microtonal Banana’, is any good – after all, they’ve plenty of immediate opportunity to make amends. As it happens, though, this is probably the most focused full-length yet from the Melbourne outfit, each track imbued with a palpable sense of purpose. Opener ‘Rattlesnake’ is pure krautrock, whilst ‘Melting’’s noodling guitars give off a heavy acid jazz flavour.

The stylistic variation is nothing new but the sheer breadth of compositional variety is; ‘Billabong Valley’ collapses into a slow strut in its latter half after a frenetic opening, and the time signatures are similarly askew on ‘Doom City’. The generally lo-fi approach to the production means that ‘Flying Microtonal Banana’ often feels low key, but given their reputation for live improvisation, expect these studio versions to feel like mere sketches by the time they’re taken to the stage.