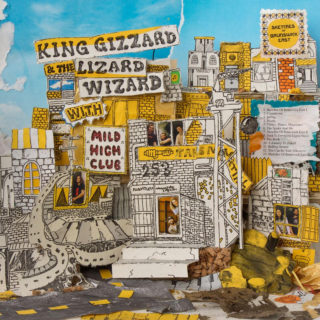 King Gizzard and the Lizard Wizard promised us five full length albums by the end of the year, and they’re well on their way to delivering. This third offering, ‘Sketches of Brunswick East’, is a sun-bleached improvised-jazz collaboration with Mild High Club, that shows the group thriving outside of their comfort zone.

The gooey nostalgic streak of much of their work is alive and well, but it’s a nostalgia for lounge music, analogue guitar noodling and elevator jams. If that sounds a tad like background music, its because it kind of is? It’s hard to listen ‘Countdown’ or the ‘Spider and Me’ without picturing every player outstretched on a hammock, eyes shut behind thick shades, head bobbing. After the non-stop psych jams of ‘Flying Microtonal Banana’ and ‘Murder of the Universe’, they deserve the rest.

Still, ‘Sketches’ is breezy, not phoned-in; there’s an immaculate flow to the album, carried by a toybox of exciting guitar tones and production quirks. At its best, like on the lo-fi flute wiggle of ‘Rolling Stoned’, these sketches are vibrant, flowing animations.

Our review of ‘Murder of the Universe’ centred on Gizzard’s utterly stunning ability to emulate their influences. They exaggerate every dated gimmick, transcending parody completely. With its dusty production quality, goofy xylophone breaks and spoken word passages, this album completely scratches that itch.

What’s just as clear is the band’s efforts to make ‘Sketches’ impress unironically. The piece darts through time signature shifts, winding, fluid melodies, and unabashed throwbacks to their older material, all without winking too hard. Though it feels natural to let these chilled passages float into the background, this is an album that rewards intent listening and obsessive fans. King Gizzard began their career celebrating cult rock heroes, and they’ve materialised into one right in front of our eyes.