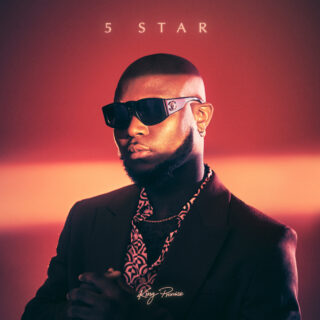 King Promise’s R&B-heavy Afrobeats sound has steadily been making friends all over the globe these last few years. From collaborations with Nigerian singer-songwriter Wizkid to Chance the Rapper to London’s Headie One, 5 Star feels like the next push to go from Accra to the world.

Recorded in Accra, London and across the U.S., whether King Promise considers 5 Star to be an album, a project or a mixtape (all three are mentioned at various points), it’s a sunny, breezy collection of tracks that pulls from across the diaspora of African sound, blending afrobeat, Ghanaian highlife, hip hop and R&B.

At 15 tracks, it’s an album that runs deep. But with King Promise’s smooth vocals, upbeat melodies and slowjam after slowjam, it’s a runtime you can sit with, particularly when the tracks seem to melt into each other. From the mellow R&B of ‘Do Not Disturb’ all the way through to the big melodic spaces of ‘Ring My Line’, there’s a soft focus and a fluidity to King Promise’s sound that dispenses with brash bangers for anthems that don’t need to kick the doors down and that would still sound larger-than-life on a big rig.