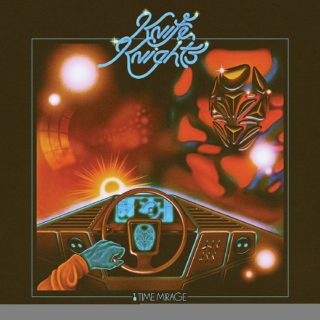 Ishmael Butler has little to prove. One half of the peerless Shabazz Palaces, one third of Digable Planets, and collaborator, rapper, producer and remixer extraordinaire, his shadow stretches long and heavy over the alternative hip-hop landscape. Yet on ‘1 Time Mirage’, the debut LP from his Knife Knights project with Erik Blood, he continues to break new creative ground.

Like Butler’s frequent collaborator Flying Lotus, Knife Knights create a rich, fibrous world around each of the tracks on ‘1 Time Mirage’. This is an album whose air you can breathe, whose fragrant musk seeps from each detail. Its production has an insomniac energy, oddly tranquil and unsettled at the same time, each dab of reverb and tickling delay sending ripples through the fug of warped beats and sardonic rhymes. Tracks like ‘Drag Race Legend’ and ‘Bionic Chords’ lurch drunkenly, verses colliding with one another in a manner that might sound lazy were it not for the immaculate attention to detail that characterises Butler and Blood’s dense arrangements.

Although occasional moments of more conventional beauty offer respite (see the gorgeous guest vocals from Marquetta Miller and Stas THEE Boss on ‘Give You Game’ for an example), most of this record occupies an uncanny valley of near-grooves and detunes. With each listen, ‘1 Time Mirage’ entrenches itself a little more firmly in the back of my mind, yet it’s more of a spectre than an earworm. Final track ‘The President’ is the most haunting of all, sounding closer to Coil or Throbbing Gristle than it does to any other hip-hop you’re likely to hear this year. As a winding, metallic drone dribbles over a stuttering beat, a nagging verse lists the trappings of the gaudy wealth that gilds the levers of power in contemporary America. As relatively flippant lines like “I’ll make all the money, I’ll even print my own / I have my name written across the sky in chrome” rub up against the more sinister “all the dreams I’ve had of ruling the world… and owning the girls”, we’re left with a chilling, paranoiac afterglow from this oddly brilliant LP.