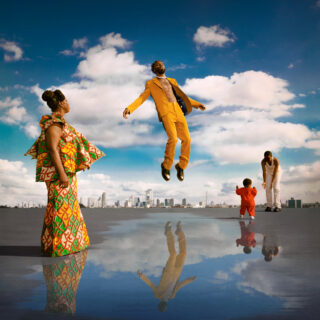 “Previously, it’s been ‘I’m warming, I’m warming, I’m warming up.’ But I’m warm now – put me in the game.” That this is how Kojey Radical views his debut album relative to his already hugely diverting body of work comes as a surprise; his four previous releases had gradually introduced him to the listening public as a singular figure in British music.

Between his pointedly poetic approach to his lyricism and his deft blending of diverse, often disparate sounds, Radical – real name Kwadwo Amponsah – has stood apart from his peers from the beginning, a spoken-word artist and illustrator with a first-class degree from the London College of Fashion whose approach to art was already multi-disciplinary even before he’d begun to forge his own musical lane.

Never before has he seemed to pay much heed to traditional release models; he has, on paper, put out four EPs to date, all of which serve to show up what a misnomer ‘extended play’ has come to be, because most would consider them too long, all at around forty minutes each, to qualify as such. From the beginning, Radical has consistently zeroed in on both the personal and the sociopolitical – touching on social media and religion on first release Dear Daisy: Opium, then family and the African diaspora with 23Winters, before using In God’s Body to delve further into Black identity and then reflecting on everything from depression to sexuality last time out, on 2019’s Cashmere Tears.

He’s slalomed through these ideas at such pace and with such intensity, ideas that he’s then refracted through the lenses of a host of different artistic disciplines, that you’d perhaps have been forgiven for assuming that the traditional musical delineation between the album as the real statement and the EP or mixtape as a place for experimentation as something that hasn’t been especially important to him.

And yet, here he is, positioning Reason to Smile not just as another set of songs, not simply another collection of thoughts and stories, but as game time – the moment he’s been putting in the work towards. He has a signature style by now, and we see that again on this album; similar motifs deployed differently. Themes can differ, but his analytical eye is the same. Nods to old influences and moves to break new ground seem to be rooted in the same basic passion for art. His embrace of collaboration feels as if it comes from the same place as his love of family and friends.

Like In God’s Body, Reason to Smile is tied together by a narration, but where it was provided by Michaela Coel back in 2017, reading a poem that Radical himself penned, this time it’s his mother, captured in candid conversation, acts as the storytelling glue as she reflects on her life, her move to England, her love for her son. It’s representative of the record’s pivot back to the personal in general; on closer ‘Gangsta’, for instance, he recasts his parents as the real rock stars for the sacrifices they made for him, whilst imagining his son as part of the same lineage both literally and figuratively (“If he got my pen, I bet he going platinum”).

On ‘Born’, meanwhile, he and Cashh spin unflinching recollections of a youth marked by poverty, lack of opportunity and immigration detention over blissfully breezy production in a manner recalling Nas and AZ on ‘Life’s a Bitch’, nearly thirty years ago. That’s the other thing about Reason to Smile; it is a full-hearted paean to classic hip hop, and absolutely awash with wickedly clever nods, both musical and lyrical, to the records that inspired him. Radical is 29, and anybody who came up on the same ’90s and ’00s touchpoints should absolutely relish the album’s relentless metatextuality.

With the list of credited producers on Reason to Smile a winding one, the challenge for Radical is achieving cohesion. He’s talked about the sound of the album being predicated on the push-pull between “bass and space”, but as much as the beats hit hard, and as much as he knows when to let a bar linger, and as much as the usual through-line is provided by repeated meditation on love, life and blackness, it’s the consistency of the energy across Reason to Smile’s 15 tracks that clinch it. This is an infectiously sunny album, which in and of itself ensures that Radical’s own space is carved out, distinct from Dave’s darkness or Stormzy’s epic atmospherics. He tips his hat to his heroes here, but the swagger and conviction that this record oozes is no imitation job – it’s all his own.