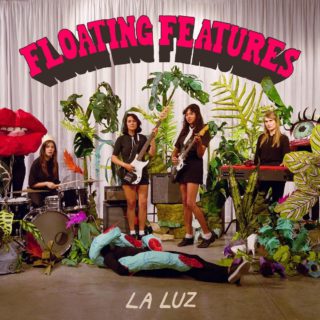 It’s impossible to listen to La Luz’s third album and not reference Quentin Tarantino and Link Wray. The L.A. quartet’s shimmering surf music immediately conjures images of pool parties attended by impossibly cool people. Scratch beneath the surface, however, and these eleven tracks are far removed from the genre’s standard of girls and cars. Inspired by the physical and psychological landscape of dreams, they create a world that’s as surreal as their Dali-meets-Little-Shop-Of-Horrors sleeve design.

Their surf noir isn’t quite as trippy as their lyrics but nor is it as retro reductionist as it might appear on first play.

The floating, dreamy vocals and neo-psychedelia on ‘California Finally’ and ‘Golden One’ are the sound of Broadcast and Dick Dale being put through a mangle. The instrumental title track, meanwhile, is underscored by a Ray Manzarek-style organ melody and ‘Walking Into The Sun’ has the country noir of ‘Blue Velvet’ spliced with doo-wop backing vocals.

Brought into sharp relief by a production that’s lush in comparison to the lo-fi, hissing overlay of previous releases, ‘Floating Features’ is a confident contradiction between Cleveland’s summery guitars and the dark undercurrent brought by bassist Lena Simon and drummer Marian Li Pino. It’s in this tension that La Luz dream hardest.