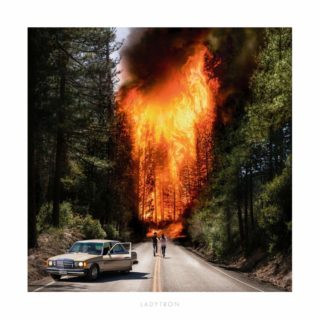 There’s an inevitable point where bands age you. Usually, it’s when the 10th or 20th anniversary of an album is rammed down your throat in all of its remastered, deluxe limited-edition cynicism. But sometimes it sneaks up on you.

Back in the giddy, guitar-driven days of the early ’00s, where The Strokes and so on inspired a generation of three-chord copycats to spew from suburban garages with Weller haircuts and banal intentions, Ladytron’s noir pop was a sleek, synth-led distraction. By numbers, it’s been 19 years, one eight-year hiatus and (now) six albums of Helen Marnie and Mira Aroyo’s sultry, androgynous vocals managing to sound alluring, accusing and totally disinterested all at the same time.

Album number six, then, carries that familiarity but it’s also Ladytron 2.0. The robotic electro, motorik beats and Kraftwerk rigidity are still heavily at play but there’s an agitation that makes that subzero impassiveness slip. Opener ‘Until the Fire’ is rousing by their typically measured standards, powered by driving drums and soaring hooks, ‘You’ve Changed’ goes heavy on the industrial Numan keys and ‘The Mountain’ veers towards Abba with its pop drama key changes. But it’s ‘Horrorscope’ and ‘Deadzone’ that showcase the dissonance, as the former goes off-key and off-script, while the latter comes alive with a disquiet that’s thawed the icy veneer in their absence.

It’s not an album to instigate any roaring “les gilets jaunes” movement, but after almost 20 years of playing it cool, Ladytron’s uncharacteristic restlessness suits them. And there’s not a hi-vis vest in sight.