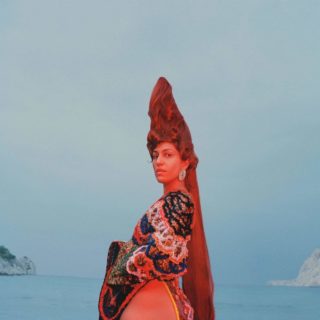 Plenty of touring artists would like to consider themselves citizens of the world, but how many of them actually sound like it? The story of Lafawndah’s fledgling career to date is a deeply international one: she grew up between Paris, Tehran and Mexico, is of Egyptian-Iranian heritage, and has lived pretty nomadically ever since she made her first foray into music proper with her self-titled and ‘Tan’ EPs back in 2014 and 2015, respectively. Since then she’s opened for Kelela in Los Angeles, crossed the music-film divide in her work with Japanese ambient giant Midori Takada and, between the studio and the stage, collaborated with the likes of Jamie Woon, Tirzah and Kelsey Lu.

Quite the CV, then, and you can only assume that if she’s gone to the effort of actually putting out a full-length she must have been determined to make a statement with it; after all, she was tripping along quite nicely as she was. Sure enough, ‘Ancestor Boy’ really does feel like a searing setting out of Lafawndah’s stall. It’s a thrillingly eclectic and unremittingly ambitious tear through not only her passport but her imagination, too. The only real connecting thread is a stream-of-consciousness lyrical style that tells a story of self-discovery as she channels the vocal inflections and percussive flourishes of Glasser one minute (the title track) and skewers Soundcloud rap the next (‘Substancia’). This is a debut of rare adventurousness.