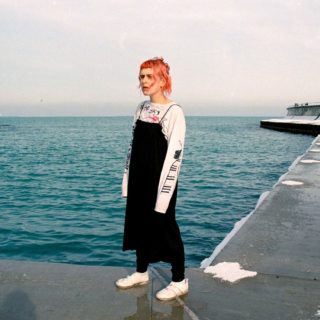 Violence and self-doubt permeate the second album Lillie West has released as Lala Lala. The themes reflect a particularly traumatic period in the Chicago-based musician’s life, experiencing a break-in, the death of loved ones and recovery from addiction during the writing of ‘The Lamb’.

As if weighed down by the experiences, she shares them with a dead-eyed delivery that sounds like it’s just below her natural range. This repeatedly rises during the 12 songs’ choruses to denote hope, while backing vocals are used on occasion with delicious irony. “I’d give it all away to be alone” she sighs on ‘Dropout’, while bassist Emily Kempf offers a companionable harmony line.

There’s a similar light and shade in the music. Opening with the chugging grunge of ‘Destroyer’, elements of dream-pop, new wave and tinny DIY synths are later introduced to moderate the mood.

While the whole thing falls short of out-right redemption and self-forgiveness, there are flashes of a pop heart. This peaks on closing number ‘See You At Home’, which adds a sax to girl group resignation to create a forward-facing kiss-off. “I release you,” she sings, as a chorus line sweetly repeats her nom de plume over and over again.