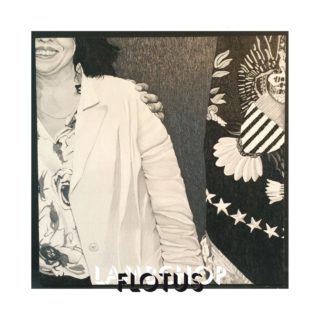 Over the 22 years that Lambchop have been making records, the only consistent presence in an ever-shifting line-up has been Kurt Wagner, whose richly rumbling, molasses-thick baritone has become his band’s most instantly identifiable component, and the rock around which personnel, instrumentation and even genres have come and gone.

It therefore initially feels like wilful self-sabotage that Lambchop’s twelfth studio album eschews that rock almost entirely, instead slathering Wagner’s vocals in slippery autotune and Vocoder effects; what’s more, it is one of ‘Flotus’’ great triumphs that, by the end of its 68 minutes, that decision feels perfectly natural.

As many an awkward experimental album will attest, that conversion is not an easy one to pull off. Lambchop do it here so gracefully by ensuring the band’s responsibilities are evolving at the same pace as Wagner’s vocals. Song structures are loosened, instrument combinations alter, and timbres vary in their complexity to complement their singers’ mutated croon: the newly uncanny purity of Wagner’s voice forces attention towards the naturally occurring grain elsewhere, making for a rather hypnotising experience.

Furthermore, while there’s rarely a moment where it’s not obvious that this is a Lambchop performance – Wagner’s growl is seldom obfuscated beyond recognition, and Tony Crow’s debonaire piano playing is always nearby – ‘Flotus’ also feels like an album liberated from back catalogue obligations, endowing it with a pleasingly abstract sense of freedom.

Perhaps the album’s masterstroke, though, lies in its running order: ‘Flotus’ is bookended by the two longest songs the band have ever recorded, which, between them, take up nearly half the album’s running time and leave the ten tracks between acting like a ferry between two shores, offering a sense of guidance even when not entirely convincing individually. And then, on that farthest shore, Lambchop make their most stunning revelation.

Eighteen minutes long and melding between electronica, chamber pop, lounge jazz and torch-song chanson, closing track ‘The Hustle’ is one of the most beguiling, arresting and romantic pieces of music to be recorded this year. For the first time on the album, Wagner’s vocals appear untreated, and their gorgeousness is accordingly accentuated; as they dart around the playful saxes and drum loops, the sense of both the band’s audacity and their conceptual virtuosity is a delight.

‘Flotus’ is long, initially challenging and is clearly an experiment, but never is it alienating in the way some experiments can be. That Wagner wrote it for his wife Mary Mancini, the chair of the Tennessee Democratic Party and titular subject (although, officially, the title is an acronym for ‘For Love Often Turns Us Still’), is perhaps the greatest indicator of the record’s warmth, romanticism and oddly welcoming inclusivity: while Wagner may have deliberately lost his voice, Lambchop have, thankfully, retained their soul.