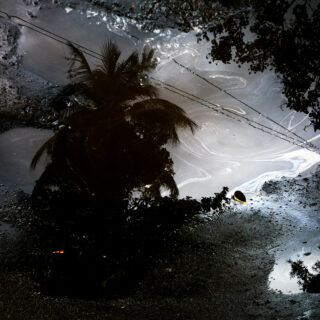 Over a trilogy of albums released in quick succession, the artist Lamin Fofana has built a deeply thoughtful body of work which explores themes around the African diaspora, migration, and the occidentalisation of music theory. The Sierra Leonean musician and producer has chosen a piece of prose to accompany each part of the triptych; on the first, Ballad Air & Fire, he quotes the poem of the same name by Amiri Baraka: “All the civilizations humans have built / (speed us up, we look like ants) / our whole lives lived in an inch / or two. And those few seconds / that we breathe / in that incredible speed / blurs of sight and sound / the wind’s theories.”

On the record’s two tracks, which act more like soundscapes, Fofana plays with white noise and long, pregnant pauses punctuated by distant instrumentation, emulating Bakara’s reflections on time and how subjective its passage can be.

The second release, Shafts Of Sunlight, is pitched as a response to the “violence and brutality of classical music theory and European imperialism and expansionism”. Part of Fofana’s approach seems to have been to eschew conventional melodic structures or tropes and instead create a sparse yet ambient sonic landscape.

The third and final record of the trilogy, The Open Boat, is the most evocative. The text Fofana has chosen to accompany it is taken from Barbadian poet Kamau Brathwaite’s Rights of Passage, a reflection on the line that can be traced between the Caribbean Islands and Africa historically, geographically and meteorologically. The frenetic drum beat on ‘Prelude (Sea Green Sea / Sidewalk of Clouds)’ is perhaps the most engaging moment in the series, adding a sense of urgency that the rest of the tracks (probably deliberately) lack. This is a project best treated as a piece of art that requires real focus – to a passive listener, the nuance may be lost among the white noise.