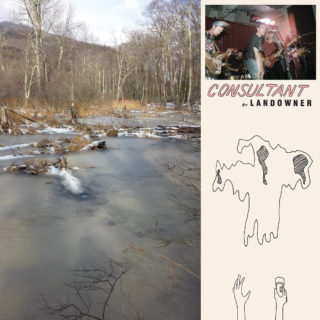 Consultant is a sharp record – and by that, I don’t just mean lyrically. I suspect that it could be because Dan Shaw, the creative force driving Landowner, is a city planner when he’s not making music, but this is probably the most pointedly angular punk band to come out since the Delta 5.

Shaw formed Landowner after he swapped the jammed-up highways of Seattle for his home forests of Northern Massachusetts. Describing his formula as “lightweight and dinky” over a scattering of EPs and Blatant, on the band’s debut full length, Landowner have perfected a version of no wave that is all their own. By collaborating with classically trained musicians, this is a band who take the nervous energy of early hardcore acts like Bad Brains and Reagan Youth and play it with the clean, cold precision of a veteran jazz act.

All this has resulted in a record that jacks up paranoia levels to breaking point. From the ghost on the cover, lit-up by torchlight like some Scooby-Doo villain to the jerky, mechanical no-wave which zips along at heart-attack speed, Consultant is an album that wills you to chase it like Lewis Caroll’s White Rabbit. It’s Shaw’s vocals, though, that is the real stand out. Sticking to what he knows, his subject matter is rooted in the politics of ownership and public apathy; from the exploitative practices of corporate agriculture on ‘Mystery Solved’ to psychically-empty yuppie housing and know-nothing consumerism on ‘Swiss Pavilion’.

There aren’t many bands out there who can so effectively skewer the relationship between property ownership and American power as well as the empty-headed macho bullshit that feeds it. But managing to do it while sounding like a council worker having a nervous breakdown, is an impressive feat indeed.

This Major Lazer album has some strong moments, but then Marcus Mumford turns up

Adrianne Lenker is a once-in-a-generation talent

Karma & Desire isn't the best Actress album, but there are some incredible moments