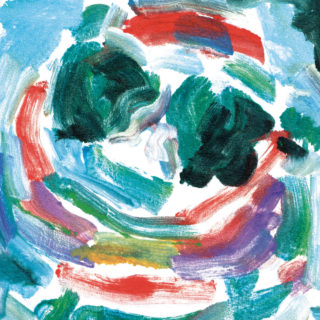 You know what you need right now? Uncertainty. Landshapes’ brilliant new album Contact reminds you how fun it is to listen to a project when you have no idea where it’s going next. The London band’s first release in five years captures the kinetic energy of their live shows and wrings it out for all it’s worth as they to-and-fro between vocalists and boldly explore multiple genres, resulting in this collage of beautiful ideas. There are drum rolls that abruptly stop and give way to psychedelic guitar grooves, followed by expansive pads that war with clanging bells interrupted by crunching distorted drums – and then there’s nine other songs. It’s genuinely impressive that an album with this many ideas doesn’t feel overstuffed or spread too thin.

The album’s title is its north star, as it considers every aspect of connection and intimacy in a way that feels rather prescient, with well-worn tropes approached in refreshing ways. Lead single ‘The Ring’ explores how landmarks in our friends’ lives make us ruminate upon why we’re falling short in our own; but instead of sinking you into despair, it makes you want to dance through it. ‘Drama’ is a breakup song, but it’s about the growing need to have The Talk rather than pretending you’re okay, the weightlessness of the spacey instrumentation contrasting with the despond of the lyrics, and that dissonance between appearance and reality returns in ‘Real Love Is Dead’ as the lyrical cynicism and drone of the guitars give way to a fluttering harp. It’s the kind of sound that’s used to signify a dream in a movie, begging the question of whether this is the band’s truth, what they really think. That’s Contact in a nutshell. How do we know what we mean to each other? We don’t. Good album.