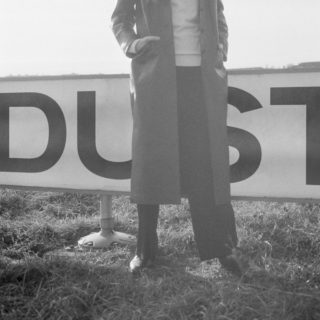 After seven years, five EPs and now three albums, Laurel Halo’s love/hate relationship with her own voice shows no sign of abating. On her debut EP, ‘King Felix’, she placed it front and centre, untreated and seldom harmonised, allowing it to soar over her futuristic RnB productions with vibrato and almost operatic zeal. She then desecrated it spectacularly on ‘Quarantine’, her masterpiece first album, stacking multiple strident takes of strange melodies vertiginously above burbling, blissful synths. And most recently, on 2013’s ‘Chance Of Rain’, she silenced her voice altogether, opting instead for two sides of disorientating and inky instrumental techno.

On ‘Dust’, Halo’s vocals reappear, but reinvented once again as several hired guns, moulded and kneaded like putty into each song’s frame, sometimes severely pitch-shifted, other times tightly tessellated to create synthetic robot choirs, and, on ‘Moontalk’, pushed into a quasi rap and flanked with clips of hysterical laughter. The effect is magnified, too, by ‘Dust’’s personnel: having worked in relative isolation on previous albums, Halo now presents an ensemble cast of voices and musicians that she manipulates into curious, satisfyingly not-quite-right shapes.

That’s not to say that this is particularly difficult listening, though. The opening pair of songs are woozily addictive slices of wriggly RnB, all playground-chant melodies and subtly funky percussion that retain their spring even as Halo progressively deconstructs each one. The second-half run of ‘Like An L’ to ‘Do You Ever Happen’, too, returns to the nagging, airless rhapsodies of ‘Quarantine’, and even the three instrumental pieces, while all markedly more abstract and shorter than their vocal contemporaries, hint at the existence of brawny hooks lurking just beneath the surface.

And then, in the middle of it all, there’s ‘Moontalk’, the most accessible song on ‘Dust’ and also Halo’s brashest bid for the mainstream to date. Opening with an insistent drum figure that’s one light-up dancefloor removed from Michael Jackson’s ‘Don’t Stop Til You Get Enough’, then building through familiar synth stabs to an earworm chorus straight from the Neptunes’ box of on-point RnB, it finally climaxes with a sweepingly phantasmagoric and deliciously wrong-footing orchestral flourish. While an almost perfect example of screwy, ecstatic post-pop, perhaps ‘Moontalk’’s only flaw is its context: surrounded by the rest of ‘Dust’’s deconstruction and occasional murk, something so direct is somewhat dislocating.

That sense of stylistic jumpiness isn’t a one-off, either. Although Halo’s first two albums were stylistically distinct from one another, each was focussed on its own soundworld, presenting just one or two long ribbons of music over its duration. ‘Dust’, by contrast, replaces that focus with a diffusiveness that’s initially jarring but, by the end, almost resembles a comforting, habituated tic, like restless leg syndrome in musical form.

Crucially, however, the effect is a little alienating too: where previous Halo albums have rewarded deep, close listening, ‘Dust’ resists it, smothering its intricacies (and its listener) with a nervous fug. It makes for an album that often feels more like a computer assembling human parts than the other way around, and accordingly leaves an uncanny, opaque footprint that feels distinct from anything Halo has done so far. Despite the return of her voice, on ‘Dust’ she appears to be less a singer and more a ventriloquist.