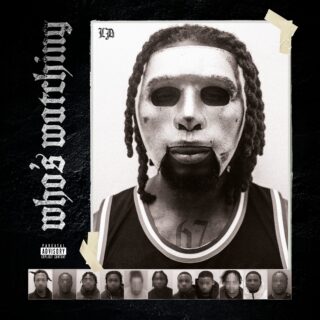 Who’s Watching is business as usual for LD, but that’s a statement all on its own. The self-proclaimed godfather of UK drill, a key member of the influential 67 collective, remains one of the genre’s most prominent and provocative figures. Back when he recorded music as Scribz, the Metropolitan Police issued him an ASBO that banned him from performing for two years. His answer was to change his name and wear a mask in music videos. He was released from jail just months ago on drug deal charges after having a four-and-a-half year sentence reduced; many of his collaborators remain behind bars. To still be making the same brash, confrontational music under such strict surveillance takes guts.

The album that marks his return is dark, defiant and tense – a brutal collection of tracks that cover his personal struggles with the law over the past few years, and violent encounters that blur the lines between fiction and reality. Songs like ‘The Ride Out’ and ‘Out on Bail’ are aggressive and paranoid. The snaking nocturnal trap production matches LD’s cold delivery well. His bars skilfully capture the harsh reality of street crime through blunt mantras that shift between sounding villainous and scared. Through it all, the police are near, listening in.

The best moments are when LD focuses on this dichotomy – knowing the law are watching and doing it anyway. He uses familiar drill formulas to emphasise the desperation of his situation.

Occasionally the album sounds slapped together, at war with itself in terms of tone. The weak spots are when the album veers into pop rap on ‘This Side’ and ’99 Problems’ – songs that feel more functional than meaningful or satisfying. The beats across the project are admittedly faceless; without knowing LD’s situation, it might blend into any number of popular trap records.

Still, LD’s talent is undeniable, and the grim, unwavering narrative he weaves on tracks like ‘Outro’ hint at a level of ambition he could well match on a future full-length project. You just hope that he can find the stability and solace he’s looking for to make it happen. For now, he’s going to make music, no matter the rules put upon him.