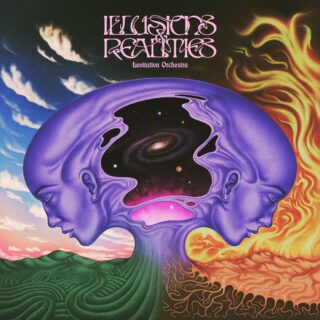 From the transcendent artwork and lofty moniker on display here, you might be forgiven for thinking you’ve stumbled into the prog section of your local second-hand record store and found this LP down by the side of a Jethro Tull bootleg from 1972. But dig deeper and you’ll find an inimitable record brimming with boundless talent, vibrant dynamism, and an effortless exploration of genre with ultimate disregard for any boundaries those labels might bring.

Levitation Orchestra are a London-based jazz collective that seemingly operate with a commune-like attitude to its ever-changing line-up. This extends to their musical approach, as the assemblage ideate cooperatively, with each individual responsible for contributing to the compositional direction. The shared, hive-mind approach fosters ownership to each member, and that autonomy imbues a ritualistic, spontaneous, and uninhibited quality to their music. On the group’s second LP, Illusions & Realities, tracks like ‘Listen To Her’ precipitously oscillate between the spiritual jazz fundamentals of Alice Coltrane, the spoken word lambast of Sons of Kemet, and the freewheeling inhibition of Ornette Coleman. Elsewhere, ‘Life Is Suffering – Send And Receive Love Only’ elegantly unfurls with delicate layering of intertwining instrumentation, highlighting celestial harp-strings and prog-inflected flute.

Despite this radically egalitarian approach, this isn’t Grimes walking the streets of L.A. with The Communist Manifesto. While there’s a palpable supernatural, cosmic and widescreen fidelity to this record, it’s also informed with an inherent grit and mettlesome lifeforce produced by their metropolitan milieu and the social issues they face. ‘Listen To Her’ explores the consequence of sexual abuse and misogyny and shows the band at their most immediate, heavy, and forthright. And ‘Delusion’ nihilistically surveys cognition and perception, pithily fathomed by questioning why we perceive “Greggs as a suitable place to eat food, or playing the saxophone makes sense.”

Illusions & Realities expresses in grandiosity, using varied and deftly applied sonic brushstrokes, but is realised with the utmost epigrammatic clarity. It bitingly cuts to the point, both musically and thematically, whilst the record’s generous composition leaves elements of jazz, ambient, electronica, prog, and even punk communicable throughout its run time. Despite existing in an already abundant ground of the UK jazz scene, Levitation Orchestra have all the tools to reach the top.