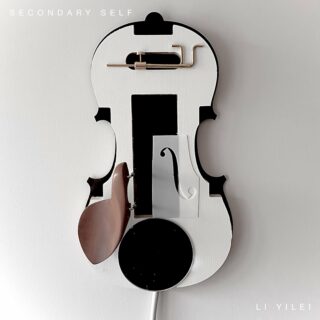 There’s a song on Secondary Self, the third record from Chinese-born London-based multi-disciplinary artist Li Yilei, entitled ‘Bird Box’, that encapsulates the mood of the overall album. Stabbing synths, tetchy electronic effects and the sharp chirping of birds conjures an inherently claustrophobic atmosphere which remains for its duration. The space within this record is an impenetrable fortress which contains multitudes. It’s one that requires the right environment when experiencing it, because it has the capacity to reveal new elements with each return.

Striking – if not more than a little anxious in its essence – Secondary Self exists more so as an immersive work of sound design than a commercial release for passive consumption. Incorporating anything from pleasant field recordings to the chugging rhythm of a machine in operation (‘Mosquito Alarm’), there’s a push-pull dynamic between the natural world, its healing and soothing tones, and the greyscale agitation of industry. ‘Murmur’ is one instance where these worlds collide. At almost ten minutes, this multidimensional song opens with an extended looped piece of rewound instrumentation which is dispersed later on by whale-like calls (summoning a likeness to the opening of Kate Bush’s ‘The Saxophone Song’) guiding the arrangement to a luminous climax.

Like many avant-garde works, the brilliance of Secondary Self will only be truly unlocked by the inspiration and engagement of its audience. There’s an unlimited range of visuals and memories that can be stirred by certain movements, each listener bringing something new to the record and taking something different away from it.