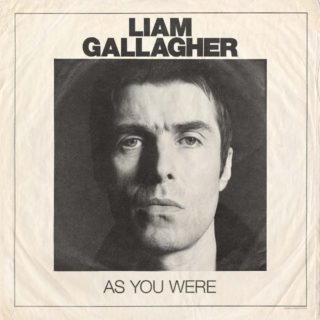 This year, Liam Gallagher’s got back to what he does best – giving funny interviews. Because let’s face it, after two dogshit Beady Eye records, no one’s expecting this debut solo album to be any good. He’s calling ‘As You Were’ his “third coming” – something brash and defiant. Opener ‘Wall of Glass’ is that, but beyond that this is an unexpectedly vulnerable set of songs. ‘Bold’ and ‘Paper Crown’ are bruised rather than posturing, building up to the ultimate mea culpa ‘For What It’s Worth’. That track captures the album’s surprising sense of introspection and provides a genuinely sweet moment.

Of course, the brazen rock’n’roll influences aren’t entirely absent – they’re most blatant on ‘You Better Run’; more Beatles than Stones (naturally). That said, there are tracks even the staunchest Liam defender might struggle to get behind here, like ‘Greedy Soul’, ‘Chinatown’ and ‘Come Back to Me’. So no, this isn’t some triumphant rise from the ashes. Some bits are alright, other bits are terrible, but it’ll be enough to keeping him talking. In that respect, ‘As You Were’ is business as usual.