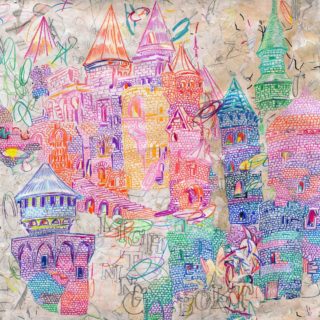 There’s an amount of certainty that comes with a Lightning Bolt record, and their seventh is no different. The Rhode Island noise rock duo have seen little deviation from form in their 20 year existence: as always, there’s Brian Chippendale on drums, his microphone bound into a sort of makeshift Lucha libre mask, and Brian Gibson on bass guitar, adapted to include a banjo string, surging with more than enough raw energy to power a short distance railway. As always, you’re left wondering just how they do it.

But it does them little justice to seem so dismissive; they’re still the gold standard for controlled chaos using as few material elements as possible (west of Japanese zeuhl giants Ruins, in any case), while still being something your dad might call “too busy”. Like living in any state of overstimulation, you’ll start to hear things akin to doppler effects and other auditory tricks. The skipping CD patterns of ‘USA is a Psycho’ drag behind where the brain hears the beat, and the slides and slopes of ‘Blow to the Head’ start sounding like a fuzzed rendition of Kiss’ ‘I Was Made For Loving You’.

But where the order of the day deviates from musical ground zeroes and levelled surfaces of pre- or extra-musical rubble you’ll find the tense space rock of ‘Halloween 3’ and ‘Don Henley in the Park’, precious ‘breathers’ before the 9-minute all-out of ‘Van Halen 2049’.

All said, if this sounds like your shit, welcome aboard, because Sonic Citadel is as good an entry point to their discography as any.