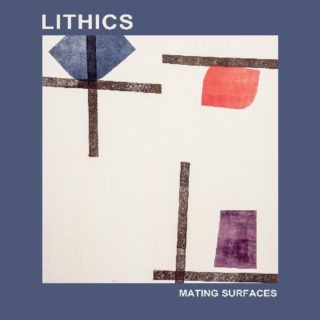 Now that we’ve had enough time to retrospectively digest it all, let’s face it: the would-be ‘revivalism’ of post-punk in the mid-2000s dredged up some insufferable trash from both sides of the Atlantic. With a name directly referencing something that consists of stone, Portland, Oregon, quartet Lithics are, forty years on, a rock solid pay-off in the genealogy of what once made the architects of DIY post-punk – from the Slits and Pere Ubu to Devo and Gang of Four – so compelling.

Despite pinning early 1980s Fall worship a little too visibly on its sleeve, the bobbing ‘Still Forms’ is a real triumph early on, while the five-minute ‘Boyce’ – the longest track by some distance – wields dissonance with remarkable aplomb. Elevating promise to certain brilliance, Aubrey Hornor’s languid vocals are fully present yet deftly unemotional on ‘Mating Surfaces’’ dozen combustions. On each of them, Lithics, bona fide post-punk revivalists, have zero dearth of confidence and it really stands to reason.