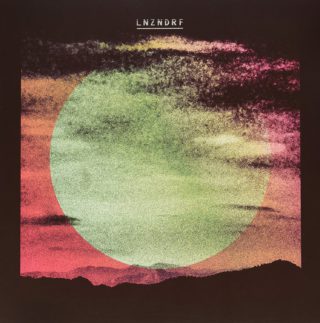 Existential angst is a tough nut to crack with rock music, deep meaning and reverb-soaked power chords being unlikely bedfellows. But by the time ‘Mt. Storm’, the third track on LNZNDRF’s 4AD debut, has blown through your brain, you’re left with a strange sense of euphoria and the feeling that the New Zealand trio might just have pulled it off. “Rock minimalism meets sonic maximalism” claims the press release, and that’s pretty accurate; it’s also accompanied by a short essay titled “A Postcard On Time And Space From Cincinnati, Ohio” that pulls in elements of multidimensionality, linear reality, and the “doorway of one’s own awareness” to explain just how special the record is. Heavy shit, right?

But LNZNDRF have that rare ability to burrow into your brain and get the dopamine flowing. It’s impressive enough that these eight tracks are the distilled essence of thirty-minute jams: that they were recorded over just two-and-a-half days in an abandoned Church makes their power and immediacy all the more remarkable. Sure, it’s easy to spot a few key influences – hints of Joy Division abound, as does the mystic drone and hypnotic repetition of Föllakzoid – and there’s plenty of feedback and distortion. But by the time ‘Samarra’ collapses in on itself in a cacophony of noise, while it might not be clear where the band have transported you, you’re just left with the elation that it was a hell of a journey.