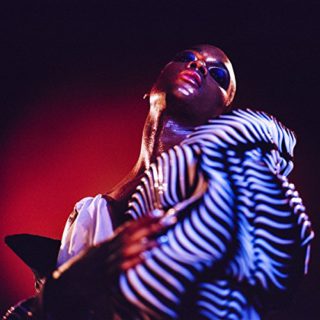 After two EPs and a few Björk remixes, Houston-born Berliner J’Kerian Morgan intended for their first full-length album to explore empowerment. But then they lost their flat, a circumstance familiar to anyone living the theatre absurdism of rented accommodation. “Mentally, I could only work on music once every three months or something”, Morgan says, and that’s just how ‘Power’ sounds; messy and candid, in a way that imitates movement and turmoil.

Noises violently ping left to right, in a way reminiscent of Oneohtrix Point Never’s recent work, sound-name-checking the adrenaline rush of Chicago footwork. But every now and then a voice fills the headphone space. Listen to ‘Hunted’: “Brown skin masculine frame head’s a target / actin’ real feminine make ’em vomit”. The teasing schoolyard chant feels clumsy and too close for comfort, only in the fraught way of authentic writing.

Over the last few years, a movement has been developing within the niche of deconstructed club music; one which seeks comfort in discomfort, self-care in aggression, a sound woefully monopolised by white, heterosexual men ostensibly for white, heterosexual men. It’s surely a stroke of genius that the middle section of this album’s 6-minute title track is waterlogged by a metal-as-fuck, double bass pedal jig. While ‘Power’ doesn’t appear to be a work of Morgan’s full force, with precious few distinguishing moments in today’s wealth of experimental electronic music, it certainly feels consistent with the movement at its best.