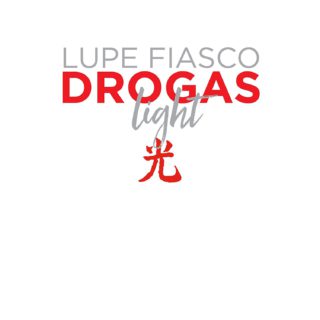 “Life ain’t a dictionary – it’s a thesaurus / And I feel like a missionary to a clitoris” jokes Lupe Fiasco on ‘Mural’, the dizzying near-nine-minute odyssey that opens his last full-length, ‘Tetsuo and Youth’. He manages to blend all sides of his persona, giddily delving into complex internal rhymes and triple entendres one minute, telling goofy sex jokes the next – somehow managing to fit sharp social commentary in the middle. It was a startling moment of alchemy that found the rapper balancing mainstream appeal with artistic spirit.

Ever the ambitious artist, Lupe later announced three albums to come in 2016 before he’d bow out of music completely. Those albums never came. With an artist as idiosyncratic [honesty filter: inconsistent] as Lupe, uncertainty followed. After a freestyle prompted backlash at apparent anti-Semitism, worries deepened. Lupe cancelled everything on Twitter. Now, we have ‘Drogas Light’, either a hype-tape for a full release or perhaps the rough cuts he had recorded before descending into theatrics. It certainly plays like leftovers, and not the glorious second day lasagne type of leftovers. This is soggy cornflakes.

The album is a jumbled collection of pop-rap hybrids, which is not necessarily a bad thing when helmed by an artist as charismatic as this. After such a dense previous project, it could be thrilling to hear the rapper refining his talents. There are a few highlights: ‘JUMP’ is a joyous piece of classic rap storytelling heightened by a stomping beat that’s tastefully tinted with EDM vivacity, while ’NGL’ is a biting look at racial oppression that’s uses its no-frills structure to its full advantage.

These highlights are dampened by the tepid tracks surrounding them. ‘It’s Not Design’ is a nauseating bastardisation of Jamiroquai, while ‘Wild Child’ waters down funk and somehow finds cyanide at the other end. ‘Pick Up the Phone’ is the worst offender, a pop-rap Frankenstein monster that feels as if it’s biting 2010-era B.O.B, of all things. The chorus dates itself immediately with its whiny answering-machine message formula aimed at the-one-who-got-away, while the bars are ironically some of the most phoned-in on the whole album. Leave your lame chorus WELL after the beep. Answering machines…in 2017.