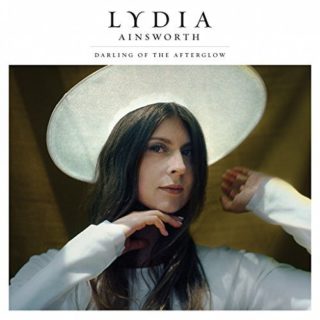 It’s telling that in place of a serene forest, lit by twilight, the cover of Lydia Ainsworth’s second album is a profile shot of her staring boldly at the camera, looking defiant yet angelic. Certainly the clanging bells, piano and synths that open ‘Darling Of The Afterglow’ signify a change – gone are the softer edges and spectral moods, replaced with something altogether more colourful and assured. That’s not to say she’s totally abandoned the dark atmospherics that made her debut so captivating – both ‘Afterglow’ and ‘WLCM’ have a meditative, otherworldly feel – but the eleven tracks here feel like the dawn sunrise after a long night of the soul.

“To play it safe is not to play at all,” she notes on ‘Afterglow’, and despite using more traditional elements this time, she’s still restlessly inventive; the Grimes-esque trip-pop of ‘I Can Feel It’ and the achingly beautiful cover of ‘Wicked Game’ are but two standout moments. Ainsworth may still be capable of everything, but honing her instincts has improved on what was an already formidable talent.