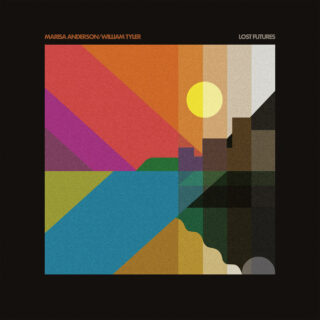 The last few years have seen a resurgence in ambient music influenced variously by country music, Morricone scores, IDM and American Primitive solo guitar. You can tell it’s getting more popular both by the interminable arguments over what it should be called – ambient Americana? cosmic country? bootgaze? – and by the fact that on the day of this album’s release Spotify subsumed the style into algorithmic purgatory with their new playlist The Frontier. Regardless of which name you choose to slap the music with, both William Tyler and Marisa Anderson have been big players in the development of the genre.

Tyler’s classic Behold the Spirit is one of the few American Primitive albums of the past decade to cut through with a mainstream indie audience. Meanwhile, on 2016’s Into The Light, Anderson began popularising the ambient-country sound palette that acts like SUSS and Chuck Johnson currently explore to great effect – washes of pedal steel, processed piano, and stark guitar lines evoking the landscapes of imagined Westerns.

The duo’s first collaboration, Lost Futures has a veneer of political commentary; much like every other ambient album ever recorded, it’s ostensibly inspired by Mark Fisher’s interpretation of hauntology, while the album’s artwork makes it clear that the album is also about climate change in the broadest possible sense. This doesn’t make it through to the music itself, which is largely too pleasant and meandering to really make clear the threat, sorrow and chaos of rapid climate change. The album’s understanding of climate change is less nuanced than Daniel Bachman’s excellent Axacan, which made clear the connections between extractive colonial capitalism and global heating without losing the music’s emotional core.

Early on the album falls into its groove – serene guitar soundscapes with minimal additions beyond a few strings or Anderson on organ – and stays there. ‘At the Edge of the World’ is an exception, with Tyler and Anderson accompanied by artist Patricia Vázquez Gómez on quijada, her scrapes of a jawbone giving the track a tension and forward drive it would otherwise lack. Meanwhile, the steady horse-hooves chug of ‘Something Will Come’ stays locked in a loop for its full six-minute runtime, which will be a mortal sin to some, but which will feel familiar to fans of film music and the hypnotic repetition of Biosphere’s Shenzhou.

The bottom line is that this album does not reshape Americana in a new image, like the work of Bachman, Yasmin Williams, or Gwenifer Raymond. But, realistically, that’s because William Tyler and Marisa Anderson already did that years ago and their influence is only beginning to be fully felt. It’s enough for Lost Futures to offer some more to completionists while giving a good introduction to those who are newly exploring the genre – whatever you want to call it.