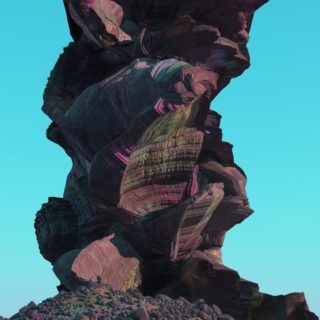 It’s been said that storied electronic producer Mark Pritchard’s musical style deals in simplicity and surface dazzle. But 2016’s ‘Under the Sun’ signalled a shift from the ’90s techno of Jedi Knights toward bold impressionism and lavish arrangements – a gamble that payed off. Just listen to it! Thom Yorke’s tiny voice. The hard left turn into folk laments. The colours and flourishes of vaguely medieval melody. It’s neo-baroque, both ornate and mournful. So why does ‘The Four Worlds’, an alleged extension of the same universe, feel so drab and antediluvian in contrast?

Granted, it’s hard to be too disappointed with a work that isn’t an album as such. As part of a new project between long-time collaborator Jonathan Zawada, ‘The Four Worlds’ lends its audio to Zawada’s glitchy visuals, which explains Pritchard’s sudden revert to rudimentary, plateauing sounds. It’s too early to tell whether the as-yet unreleased accompanying film will suddenly pull things into focus. Nonetheless, Pritchard’s sonic regression is strikingly unremarkable.

The progressive house introduction ‘Glosspops’ is oddly pedestrian, as if lifted from some lesser producer’s cutting room floor. The rest – bar the competent bit of dark ambient title track closer – are pallid and stripped versions of what we’ve already heard from Pritchard. But what turns this record from innocuous to annoying is the vague, Radiohead-shallow political “commentary” of its spoken word tracks, featuring Gregory Whitehead and The Space Lady, suggesting Steve Reich’s tape experiments with none of the heft. A lacklustre chronicle, indeed.