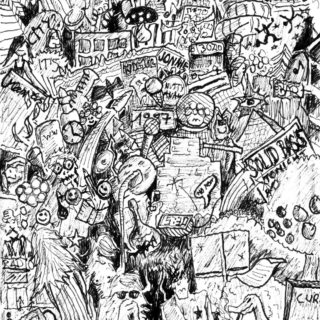 Backed by a strong band in The Desdemonas, DJ/producer Matias Aguayo nails the smooth transition from four-to-the-floor electronic music to disco-flavoured post-punk. There are pockets of bedroom ambient with ‘6 am’ and ‘The Rabbit Hole’, but ‘Sofarnopolis’ is largely built on Can-ish grooves; the spirited galvanism of ‘Ege Bamyasi’ shot through with the crepuscular air of ‘Soon Over Babaluma’ (admittedly with the latter’s overlong runtime). Each track is skeletal and primitive, with few musical elements beyond a propulsive rhythm section and Aguayo’s full-Damo Suzuki vocal improvisation. “The record is the soundtrack of a series of fantasies around a fictional city called Sofarnopolis,” writes Aguayo, “or maybe Sofarnopolis is just a state of mind.”

While there’s no discernible ‘story’ going on here – regardless of any shoehorning by the artist – the only narrative of interest on ‘Sofarnopolis’ is purely stylistic. Aguayo and his band succeed by hitting on a sonic plane and boldly occupying it for over an hour. Everything sounds the same, and rightly so. Why do anything else when what you’ve got is this infectious?