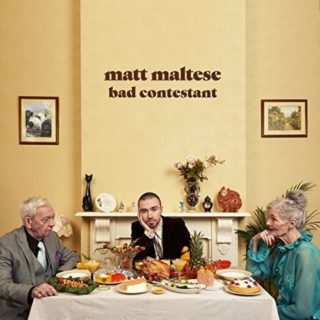 After years of teasing, south Londoner Matt Maltese has finally gotten around to releasing his debut album. We’re two years on from his ‘In A New Bed’ EP and a year since single ‘As The World Caves In’. Recorded with Foxygen’s Jonathan Rado in twelve days, ‘Bad Contestant’ has the touch of someone who spends time with The Lemon Twigs, with multiple parts being reminiscent of Brian D’Addario’s more Todd Rundgren-esque efforts.

‘Like a Fish’ has Wings era Paul McCartney stamped all over it, but with the very un-Beatles beginning line: ‘You said you use chocolate / When you and him take off all your clothes / Why the fuck you’d tell me that?’. It’s not bad, but the real contender for lyric of the record is ‘I bought Cranberry vodka / It’s good for your bladder / When you said that, I knew that I want you,’ from ‘Nightclub Love’.

Unlikely lines like this give Maltese his skewed appeal – it’s been done before, but remains fun all the same. So ‘As the World Caves In’ is a romantic song about a nuclear holocaust while ‘Misery’ is ironically way more optimistic, sung like Maltese is in a dystopian jazz club.

For all its lyrical quirks, at times it still meanders a bit too close to generic chart pop, but with words to give Father John Misty a run for his money, this feels like it’s only the start for Maltese. If the world doesn’t end.