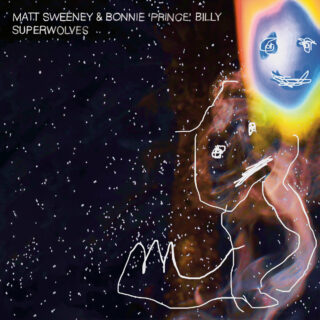 16 years after Superwolf, the first collaborative album from Will Oldham and Matt Sweeney that combined the former’s cracked country croon as Bonnie ‘Prince’ Billy and the latter’s gritted guitar, comes a sequel, of sorts. Superwolves unequivocally exists in the same soundworld as its predecessor – wearied outlaw soliloquies and playful love songs to kith and kin laced around intensely hushed electric guitar – but is also heavier than last time round.

That’s not to say Oldham’s gone rock, 30-plus years into a career of quiet: Superwolves’ heaviness is more often implied than enacted, with Sweeney’s guitar playing largely muzzled and hints of feedback swirling in the background of otherwise fairly delicate songs, rendering the likes of ‘God is Waiting’ and ‘Watch What Happens’ as the sort of gothic chamber pop whose ever-present growling low end threatens to erupt at any time, even if it never does.

That restraint is the album’s key. It makes the moments of noisy abandon – four bars of fuzzed-up wig-out on ‘Make Worry for Me’, the blast of background shredding on ‘I Am a Youth Inclined to Ramble’, or the arrival of Tuareg guitarist Mdou Moctar on the rollicking desert blues rockabilly of ‘Hall of Death’ – all the more captivating, and serves to accentuate the album’s lighter moments, too: around such brooding, the gently upbeat and gorgeously concise funeral song ‘Resist the Urge’, one of Oldham’s best in years, sounds that much sweeter and more poignant, and ‘There Must Be a Someone’ is a lonesome country waltz transformed from mawkishness into something wilder by Sweeney’s pared-back playing.

Indeed, such is the accomplishment of this collaboration that the inclusion of a couple of more traditionally Bonnie ‘Prince’ Billy-sounding songs towards the album’s end feels a little extraneous. They unwittingly demonstrate that it’s when Oldham and Sweeney are operating as one that Superwolves shows its class.

Sons of Kemet have made the alternative sound of 2021

On the evidence of BOY ANONYMOUS, the sky's the limit for Paris Texas