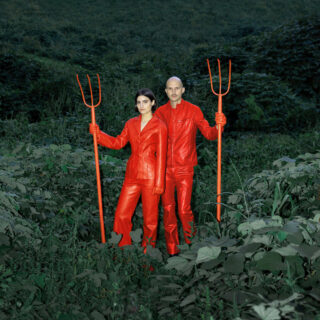 The third album from Atlanta-based duo Mattiel is shaped by journeys. Georgia Gothic transports the listener into a dusky landscape, driving along an American highway with no distinctive destination other than an intangible sense of liberty.

On Mattiel and Satis Factory, Mattiel Brown and Jonah Swilley approached their creative process as two separate minds, but Georgia Gothic sees the duo explore what it’s like to be one entity. As a result, the songs are not only cohesive and experimental, but expansive in their references. Mattiel’s musical DNA is rooted in ’60s rock and roll with a Southern edge, but they venture into folkier territory on ‘On The Run’, backyard blues in ‘Wheels Fall Off’, and sleek indie which is reminiscent of Haim and The Kills with the lead single ‘Jeff Goldblum’. There’s even a conversational strut in Brown’s vocals on ‘Subterranean Shut-In Blues’ which echo the distinctly enigmatic tones of Mark Lanegan, and reveal a band who are set on trying out new techniques.

Perhaps as a nod to the way in which the songs were created, a lot of the lyrics speak to gaining a new perspective on the world; to finding new meaning in the mundane. Brown, at times, carries a sense of slinky nonchalance which grows in prominence as the album goes on, and it could be said that this newfound spirit is a result of shaking up the way the duo had previously worked together. By the time Georgia Gothic comes to a close, you’ve been taken to a defiant and confident point of redemption which simply oozes that carefree feeling you get when you’ve got the windows rolled down and the radio turned up real loud.