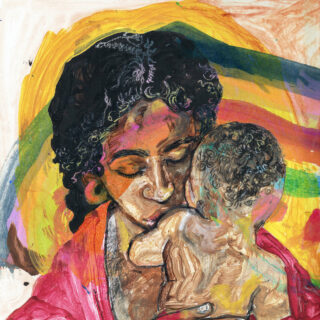 Modern boredom has come for us all in different ways over the past year. For Virginia rapper McKinley Dixon, it’s meant alternating resources to Black and trans fundraisers across his social media with discussions about which cartoon dogs or early-to-mid-2000s pop punk bands he could beat in a fight: Brokencyde, A Day To Remember, three iterations of Dance Gavin Dance. He would lose to Babymetal, but wouldn’t we all?

His label debut, For My Mama and Anyone Who Look Like Her, is caught in the same, very human, crossfire, where humour and braggadocio are tools for contemplation, learning how to grieve, process and communicate Black trauma. It’s an album deliciously characterised by its singles. ‘Chain Sooo Heavy’ is a vitrine for McKinley Dixon the rapper, coolly directing the live arrangement that swells with theatrical chaos of Kamasi Washington’s The Epic; ‘Swangin’ is his community in Richmond alive within a sonic motorcade; ‘Make A Poet Black’ is his politics.

Where perfectly articulating a complex grief would be dishonest, death sentences are delivered as punchlines mid-breakdown; pain is processed by the palatable small losses (“He’s probably going to be absent from dinner tonight. Fuck!”) Reasonable outcries of heartache are framed as room-full-of-mirrors blasphemy – goddamn. Toni Morrison-inspired ‘B.B.N.E.’ is a standout: a string section simulation of a siren wail sinks Dixon’s ego snatch (“My mama don’t know your name / My gang don’t know your name”) into a meditation on blackness and creating a legacy.

Be it the switch from Miles Mosley brass to Interstellar Space-era Coltrane in ‘Never Will Know’, or the harp and flute in ‘Mama’s Home’ that gently recoil into the record’s arms, For My Mama is introspective hip hop at its best, a string quartet away from baroque pop bedlam, but without distraction from a vital new lyricist at its centre.