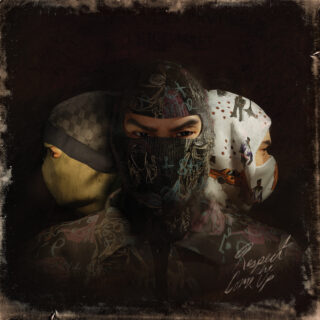 Meekz raps with an assertiveness that assures he’s beyond being labelled a newcomer. At times, the alpha-raps alone do enough to command your attention, but they’re best when working in tandem with the rapper’s crisp delivery. Meekz’s Manc inflections are the crux to his new mixtape and what make him so distinctive in the UK trap space. His sullen voice commands the highlights, particularly when the production leaves little to work with. The jazzy ‘Hustlers Ambition’ and the triumphant ‘Take Losses’ show what’s possible with distinct beats, toppling tracks from less imaginative artists that rely on trap knocks too frail to alert the houseowner.

Still, you’re always waiting for Meekz to say something profoundly memorable. Catchphrases like 2020’s ‘Can’t Stop, Won’t Stop’ are missing from the arsenal, leaving Respect the Come Up with passable short straws that are a hook away from hitting like the lead singles. He comes close on certain occasions, attempting sharp flips like “Selling tic tacs is how I learned my tactics” on the ominous ‘Say Less’, though flat statements such as “I don’t rap, I make sounds” negate their impact. As a harmless serving of trap mantras, Respect the Come Up is wisely a tight affair, but needs more weight to tip the scales.