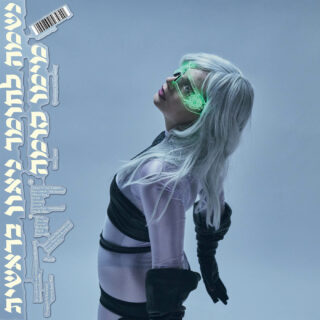 Neon Genesis Evangelion is a ’90s anime TV show about a sad boy who pilots a giant robot – kind of. Owing to its use of imagery lifted from mystical traditions (crosses, the Kabbalistic tree of life, the peppering of names like Adam, Eve and Lilith) the post-apocalyptic premise is so steeped in ambiguity that nobody can really say what it’s “about” other than the search for higher meaning in an entropic world. Having studied Kabbalah to connect with her Jewish identity – as the ancient-modern cadences of Kenji Kawai’s Ghost in the Shell score played quietly in the background – Lara Rix-Martin, aka Meemo Comma, cryptically addresses the same eternal question with Neon Genesis: Souls Into Matter².

Superficially, the LP bears a closer resemblance to her first Meemo Comma album, Ghost on the Stairs, in its emphasis on computerised beatmaking. While Rix-Martin has always been a gifted musical storyteller within the often immutable and tricky mode of ambient music, ‘Neon Genesis Title Sequence’, ‘Tohu & Tikun’ and ‘Tif’eret’ benefit from inventive exercises in drum and bass, dub and techno, tied neatly together by the album-length thread of looped vocals and angelic choruses. Neon Genesis Evangelion’s final episode ends on a note of self-actualisation amid all the chaos; a momentary release that feels woven throughout Souls Into Matter² in name, sound and concept. It feels like the result of an artist dedicated to exploring her own selfhood through art, which is all you can ask of an album featuring cosplay on the sleeve.