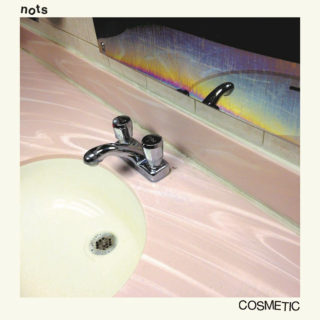 A year and a half after their bursting debut album, Memphis DIY rockers Nots are back, and it remains hard and meaningless to try and label the four-piece’s sound: it draws from early-punk’s urgencies but leaves aside its dirty, self-destructing nature; it is reminiscent of the best acts of the original Riot Grrrls era, but without ever feeling nostalgic and retro manic. In this second release, Nots add a touch of kraut to their mood, too, giving the restless beating of their songs a sort of spacey aftertaste, useful to loosen up the tunes’ tight hammering of guitars, bass and drums.

Unfortunately, though, the distended synth echoes aren’t enough to prevent Nathalie Hoffman’s vocals from being impossible to distinguish from the instrumental saturation, a flaw that Nots carry on from their previous release. ‘Cosmetic’’s informed lyrics are lost in the lo-fi mix, relegated in the background and gone astray under layers of distortion, making it hard for the listener to get through the nine long tracks here with the interest they supposedly deserve. And it’s a pity.