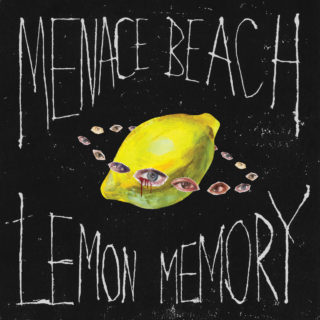 Any band with a name as cool as Menace Beach is always going to be liable to over-promise and under-deliver. So it proves with Leeds-based duo Liza Violet and Ryan Needham and their second LP, which kicks off as an exciting collision of early-Nineties alternative rock and Hooksworms-aping psych, but quickly runs out of steam. ‘Give Blood’ represents an excellent opener, with Needham yelping his way around ‘Dirty’-era Sonic Youth skronk, replete with the obligatory screeching coda.

New single ‘Maybe We’ll Drown’ immediately brings the energy levels down – rarely a good sequencing move for an album’s second song – and never really seems to get going. From then on, it’s a decidedly hit-and-miss affair; ‘Sentimental’ isn’t sharp enough to get away with thrashing through two chords even for two-and-a-half minutes, but Violet’s ‘Suck It Out’ and ‘Owl’ show some promise.

Ultimately though, the problems with ‘Lemon Memory’ are two-fold: first, the songs aren’t distinctive enough but secondly – and much more damagingly – they rarely resolve into anything particularly exciting.