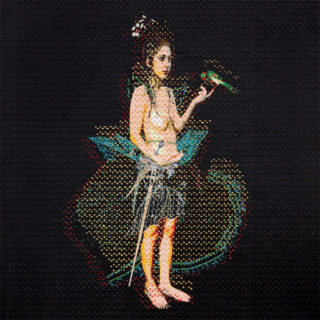 Having been born in Iran and lived in Berlin, France, and the UK, Samar Rad’s life experience makes her something of a poster woman for these warmongering modern times. After moving to France as an 8-year-old to escape war in Iran, she moved back at 14, relearning Farsi practically from scratch and switching from studying Latin and French literature to Arabic and the Qu’ran.

These “existential wanderings” (as Rad calls them) have ultimately shaped her polyglot sound alongside Persian poetry, traditional instruments and the inward-looking contemplation of Sufism. It gives ‘My Enemy, My Love’ a spiritual existentialism that enables a track like ‘Longing’ to take a Mooyeh mourning chant from Iran and spin it into all-engulfing Fever Ray darkness or allows you to imagine the opening of ‘Nature’ getting dropped into The Prodigy’s ‘Smack My Bitch Up’ as the eastern-inspired interlude.

They might be slow-burning, patient tracks but Rad’s use of rhythm and mysticism maintain that beguiling presence. It’s a combination that comes to life on title track, ‘My Enemy, My Love’ as Rad uses a daf (a large hand drum with metal ringlets) to crash out a tempo that’s propulsive, industrial and ancestral all at the same time; elsewhere, ‘Loyalty’ takes a similarly percussive approach, but refines it to a simpler marching drum mantra.

That introspection and worldview paired with dark electronica and traditional Iranian melodies make for a fascinating, if complex, listen that pushes beyond convention. And it’s that melting pot strength that makes this one worth digging deeper, wherever you’re from.