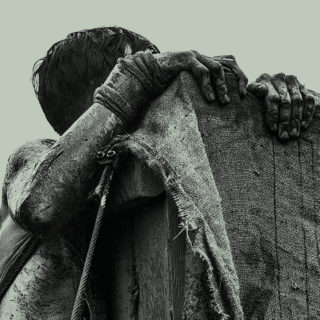 The Margherita: Mozzarella, tomato, basil. A certified classic. There’s no messing around with pizza. It’s just there to do its thing. It’s simple, reliable and perfect for a party. While it’s hard to say for sure whether Metz are directly influenced by Italian cuisine, the group certainly share a lot with the humble pizza dish.

For the past decade Metz have released album after album of scuzzy punk classics, embracing the storied past of Sub Pop while adding just the right amount of angular modernity. Atlas Landing, the noisy Canadians’ fourth album, delivers more of the same, in the best way possible. It’s loud, angry and ready for a few beers.

Opener ‘Pulse’ smashes into your skull like a sort of goopy-eyed, post-punk version of Pissed Jeans. The track starts off quietly, but you know it’s only a matter of time before the noise arrives. And when it does, boy is it loud. Playground riffs and monstrous drumbeats combine to pummel you into a grunge-fuelled coma.

This trend continues throughout the album. ‘The Mirror’ and ‘Hail Taxi’ thrash around in that signature Metz way. Guitars fall apart, drums implode and bass string rattle, but in the end everything stays intact, just about… It’s nothing new, but when noise is this good, who cares?

Finale ‘A Boat to Drown In’ is the perfect full stop in a record full of exclamation points. The track manages to capture that “end of album” feeling. By gathering everything the group has done to date and mixing it together Metz manage to create a perfectly potent cocktail, one filled with nostalgia, sadness and grinding euphoria.

It might not be as good as pizza, but with Atlas Vending, Metz have released one heck of an album. All that’s missing is the mozzarella.