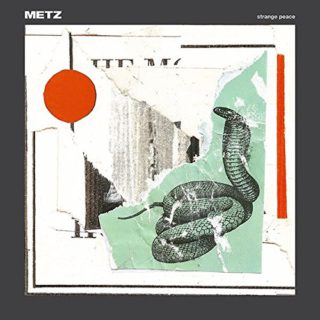 Three albums in, and everyone should know what they’re going to get from a METZ release by now. Balling together influences from across the ‘hard’ rock rainbow, they’ve perfected a squalling, melodic version of punk that critics tend to compare to The Jesus Lizard or mid-career Nirvana.

However, punk can be a suffocating genre, and after the success of the band’s sophomore release ‘II” (which doubled down on the nihilistic fury of their debut and then some), it was starting to look like the Canadian three-piece had painted themselves into a corner. So, like so many before them, METZ have taken the well-trodden route to Chicago, camped out on Steve Albini’s floor and have attempted to elbow themselves some artistic wiggle room.

‘Strange Peace’ is the result of those sessions, and if anything, it takes METZ’s signature bleak, fatalistic imagery and heats things up a notch. Songs like ‘Lost in a Blank City’ and ‘Raw Materials’ might be the closest the group get to the extended sonic intensity of The Wipers, but mostly the band stick to what they do best; namely, short, sharp, noise punk beatdowns that barely pause for breath, let alone bother with choruses.

It’s easy to admire METZ for their conceptual purity, but I can’t shake the feeling that ‘Strange Peace’ is a missed opportunity. Like a painting hidden under another painting, tracks like ‘Sink’ with its nervous, tension-laden no wave and the cruel, Pissed Jeans style grind of ‘Cellophane’ hint that there’s an abandoned experiment lurking somewhere beneath all the layers of distortion.

Don’t get me wrong, ‘Strange Peace’ is a good record and METZ definitely benefit from Albini’s crisper and more muscular production; but if only they’d been able to tease out the tonal switches a bit more, then it could have been a really great one.